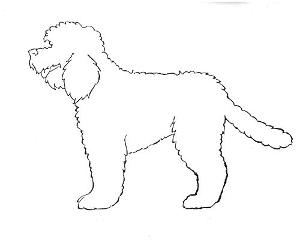 Utilization Water dog used for hunting wildfowl. Like all water dogs, the French Water Dog is more than just a retriever; he must search for, locate and flush out the game hiding in the water vegetation. He then retrieves the game shot by his master. Very resistant to cold, he shall go to water in all weather.

Brief historical summary A very ancient breed, common throughout France, used for hunting waterfowl and described or mentioned in several works as early as the 16th century.

General appearance Medium proportions, medium size, characterized by a thick, woolly coat which guarantees efficient protection against cold and damp. The coat forms a beard (French: barbe) on the chin, which gave the breed its name (Barbet).

Tail Slightly raised, carried above the horizontal when the dog is in action, low set, forming a slight hook at the tip.

Feet Round, broad, covered by hair.

Movement / gait Easy movement, the limbs moving in line with the body. Medium length foreleg stride with good thrust from the hindquarters.

Hair Long, woolly and curly; can form strands. The coat is furnished, covering the whole body in a natural state. This is an essential characteristic of the breed. The French Water Dog may be groomed in a specific manner to accomodate its work and maintenance.

Colour Solid black, grey, brown, fawn, pale fawn, white or more or less pied. All shades of red-fawn and pale fawn are permitted. The shade should, preferably, be the same as the colour of the body.

Faults Any departure from the foregoing points should be considered a fault and the seriousness with which the fault should be regarded should be in exact proportion to its degree and its effect upon the health and welfare of the dog.

The Barbet – also called French Waterdog – is supposed to be one of the oldest French breeds. The origin of the breed is still unclear, but drawings and records about such a dog can be traced back to the 16th century.

Originally the Barbet has been used as a retriever to hunt fowl. A couple of years age there were only a few Barbets that were used as hunting dogs, but now the Barbet can be found again in the field, doing what he was initially bred for. Because of his hunting traits, the Barbet is very well qualified for dog sport like FCI obedience, nose work, rally obedience and agility. Furthermore - as it should be for a waterdog - the Barbet loves swimming and retrieving from the water.

Because of its unusual curly coat the Barbet has become very popular. Often people stop and want to know more about the breed. The coat is non-moulting and thus the amount of coat maintenance is dependant on the length of coat which can be trimmed for the hotter months. If the coat is kept long, then regular brushing to keep it tangle free is required. With some practice and the proper equipment it gets a lot easier.

The Barbet is an active breed which enjoys work and play equally and can be used for a variety of activities where it uses its agility, stamina, sense of smell and intelligence. It loves playing with family members and often even invites them to play. The Barbet becomes very attached to its owners and makes an excellent companion. It wants to please its owner. Often it will follow you around in the house or wants to be in the same room. The Barbet is active when outside but inside it is quite relaxed and likes to sleep in the most funny positions.