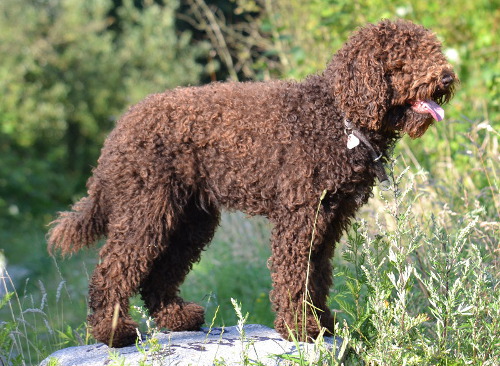 Bluna's pedigree in the Barbet database

Bluna du Bois des Buis was the first Barbet (as a female dog correctly called Barbette) in Kiel when she moved in with us on 17th October 2010. From the beginnig Bluna was a dog that could be handled easily. She's a dog that wants to learn commands and likes working. She likes kids and is easy-going with other dogs.

Already as a puppy she attended a dog school. We train with the Hovawart Club Hovawartfreunde Schleswig-Holstein Mitte. In Croatia we used to train for Rallye Obedience KOSSP and FCI Obedience on our own or in Slovenia.

From 2012 on we sometimes showed Bluna at dog shows where she always got excellent reviews. She holds the title of the German Champion Deutscher Champion (VDH), the Croatian Champion of Beauty Hrvatski izložbeni prvak, and the Croatian Veteran Champion Hrvatski prvak veteran. She also passed the socialisation test in Switzerland with flying colours.