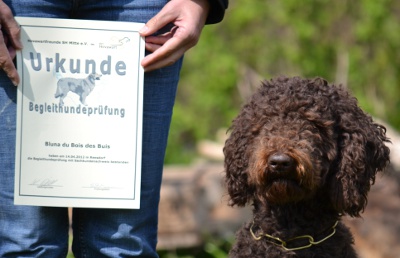 For a dog to be allowed to start at a competition in dog sport, the dog has to pass the companion dog test. The test consists of a certificate of competence of the handler, an obedience test for the dog as well as a part that test the social compatibility of the dog. Bluna passed the companion dog test in April 2012 Bluna.

Ever since Bluna passed the companion test, we train and participate in FCI Obedience with her obedience. Obedience is a sport that does not only require bodily fitness, but also a harmonious relationship of handler and dog, precise performance of the exercises. The exercises consist of heeling, sit, down, recall, retrieve over high jump, directed retrieve, scent discrimination and distance control.

Bluna is meanwhile in class 2 and from time to time we start in competitions in Austria or Germany.

Pepsi has visited different puppy training and obedience courses at KOSSP and successfully passed the tests TOS and A0 which entitles her to participate in competitions.

In 2017 Pepsi started nose work, and works enthusiastically ever since.

load more hold SHIFT key to load all load all